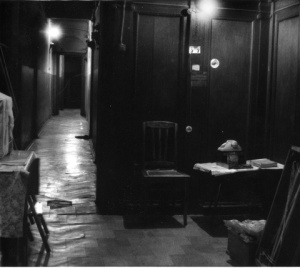 Outwardly a mystery story, The New Moscow Philosophy is concerned with the relationship between literature and life. Within the meta-textual story, the narrator’s argument that literature does not merely reflect life but is life takes place in a series of digressions like this:

That scenes from everyday life separated by a century and a half are so similar invites us to reflect yet again. What if Ecclesiastes was right and there really is nothing new under the sun […] What does this hypothesis imply? First, it’s possible that in its origin, that is, intrinsically, literature is implicated in the very idea of life […] Second, it’s possible that rather than merely being a crafty reflection of life, literature is the imprinted idea of life itself […]

Setting the story in a communal apartment in Moscow, during the Mikhail Gorbachev period of glasnost, allows Vyacheslav Pyetsukh to reminisce about communal living: “[…] communal apartments were universities of newly structured human relations.”

Pyetsukh brings together thirteen principal characters, mostly resident in the communal apartment. Parodying Dostoyevsky’s Crime and Punishment, an old lady disappears, possibly murdered, many of the residents are implicated by this apparent crime, each seeking the “augmentation of living space.” Two tenants take it upon themselves to solve the mystery, all the while debating the nature of evil and morality.

The narrative, though entertaining, occasionally feels secondary, a structure to facilitate Pyetsukh’s philosophical discourse, but the line of argument he pursues is sufficiently perceptive and fascinating to drive the novel forward. A brilliant book, possibly the best I have read so far in 2011.

3 thoughts on “The New Moscow Philosophy by Vyacheslav Pyetsukh”