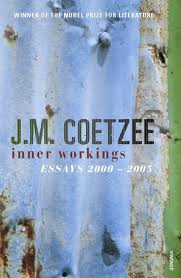 Literary essays by novelists are rarely worth reading. Coetzee, like Woolf and Kundera, is an exception. Inner Workings is compiled from five introductions by Coetzee to contemporary editions of works by Graham Greene, Arthur Miller, Robert Musil, Samuel Beckett and Hugo Claus, together with 15 essays for The New York Review of Books.

Two-thirds of the book deals with the literary achievement of the generation of cultured Jewish writers that emerged from the wreckage of the House of Hapsburg (with Walser, Musil and Celan my high-points). The last third is primarily post Second World War British and American writers, and a few contemporaries.

Unlike some novelist-turned-critics, Martin Amis leaps to mind, Coetzee’s reviews are courteous and balanced, no histrionic name calling, but with the wit to place a writer firmly under scrutiny. I mostly concur with his implication that Walter Benjamin was a political poseur who frequently reached beyond his ability to sustain a project, but I cannot claim any deep reading of Benjamin.

To add depth to his criticism, Coetzee provides historical context. As an adept in the English, Afrikaans, Dutch and German languages he is also uniquely able to comment on the translators’ craft. Although praising Michael Hofmann for the expression, poise and precision of his English, he has concerns about his translations of Joseph Roth.

A rewarding set of essays from one of the major writers of our day – I’ve already ordered the set of essays that precedes this collection.