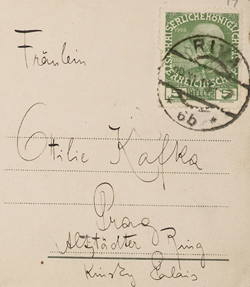 The newly acquired letters of Franz Kafka to his sister Ottla are on public display for the first time at the Bodleian Libraries. The Liebe Ottla exhibition celebrates the letters’ acquisition in partnership with the Deutsches Literaturarchiv in Marbach, a pioneering collaboration between two cultural institutions, which jointly bought the letters in April 2011.

The exhibition includes eighteen letters and ten postcards and picture-postcards which reveal the close relationship Kafka had with his favourite sister, Ottla, the youngest of his three sisters and the family member to whom he was closest. In a letter dated 4 July 1918, on display in the exhibition, Kafka states how well he and his sister understand each other: ‘in fact we do live or I live with you better than with anybody else’. Most exhibits are in Kafka’s own handwriting and some also contain Kafka’s own drawings.

The correspondence gives an insight into Kafka’s life, his travel and everyday life as much as they sketch a portrait of Ottla, ‘a woman who struggles for emancipation against considerable odds’ (Prof Ritchie Robertson, TLS, October 2011)

It’s been a couple of years since my last outing to Oxford. I feel an excursion in the air.