I felt only night within me and it was then that I conceived the new art, which I called Suprematism. 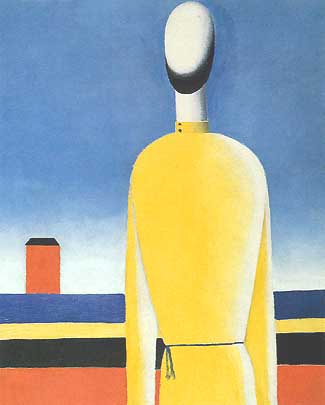 Complex Presentiment: Half-Figure in a Yellow Shirt preserves the classic Suprematist attitude – the face is entirely eclipsed by the polarising extremes of pure black and white, and crescents of an oval. The lustrous sheen of paint allows an illusionistic reading of the form of the figure, which seems to be positioned within a receding landscape. This scheme, however, is unravelled through a blatant contradiction: red occupies both the low immediate foreground horizontal and the high vertical band forming a house on the far horizon. It is exactly the same red in both instances. The seamlessness of paint application is consistent throughout the block, yellow, and blue intervals separating the red band from the red rectangle, and this creates an anti-illusionistic flat area.

Offset against this, the return to the techniques of classic Suprematism allow the suggestion of volume in the figure’s torso, arms and head. Despite the impossible play of light, which shines from the right on the limbs and torso but from the left on the head and neck, our instincts urge us to see curvature and volume; thus the work almost exactly replicates the contradiction observed twenty years previously in Malevich’s interpretation of Léger’s cylindricism. Although scholars have frequently (though rarely specifically) noted the formal similitude between early works, such as Peasant Woman with Buckets (1912) and late works, such as Complex Presentiment (1928-32), the underlying drive of Malevich’s final oeuvre differs sharply in its understanding of how painting operates to signify meaning.