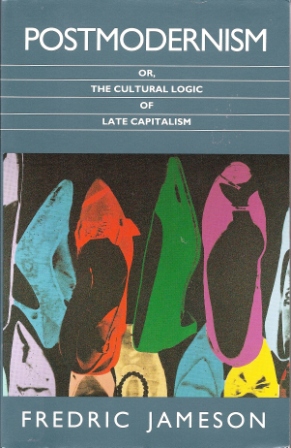 On this first reading of Fredric Jameson’s Postmodernism, or The Cultural Logic of Late Capitalism, roughly a third of it whistled straight over my head-the seventh chapter is impenetrable without more grounding than I possess in theoretical discourse-and I don’t intend to write much about it on this occasion. This is partly because I wish to closely reread it section by section, but also because it covers so vast a terrain-encompassing several visual art forms (film and video in some depth), architecture, literature (Ballard, Berger, Brecht, Dick, Faulkner, Kafka, Norris, Robbe-Grillet, Simon), philosophy, theory, sociology and economics-that no single post could capture its depth and insight. Each chapter, and in some cases, individual paragraphs merit separate posts. Though I don’t plan that sort of undertaking I will certainly return to the book in future posts (perhaps I should begin another blog on this book alone).

Incidentally, Jameson explores in some depth the handful of writers detailed above (not a definitive listing) but strangely (to me) fails to mention Borges or Nabokov, both whose approach I consider irrefutably Postmodern. Fokkema argues in Literary History, Modernism and Postmodernism that Borges “contributed more than anyone else to the invention and acceptance” of Postmodernism. Though Jameson touches on literature he emphasises that it is the weakest art form of Postmodernism:

For some seventy years the cleverest prophets have warned us regularly that the dominant art form of the twentieth century was not literature at all-nor even painting or theatre or the symphony-but rather the one new and historically unique art invented in the contemporary period, namely film: that is to say the first distinctly mediatic art form. What is strange about this prognosis-whose unassailable validity has with time become a commonplace-is that it should have had so little practical effect.

As a framework for his treatment of Postmodernism, Jameson adopts Ernest Mandel’s interpretation of late capitalism:

[..] there have been three fundamental moments in capitalism, each one marking a dialectical expansion over the previous stage. These are market capitalism, the monopoly stage or the stage of imperialism, and our own, wrongly called postindustrial, but what might better be termed multinational capital. I have already pointed out that Mandel’s intervention in the postindustrial debate involves the proposition that late or multinational or consumer capitalism, far from being inconsistent with Marx’s great nineteenth-century analysis constitutes, on the contrary, the purest form of capital yet to have emerged, a prodigious expansion into hitherto uncommodified areas.

Using Mandel’s thesis, Jameson explores Postmodernism and the logic of its progression from Modernism, its historical apotheosis in the 1960s and 1970s and its implications as a cultural, intellectual and economic phenomenon. Suffice to say, Postmodernism, or The Cultural Logic of Late Capitalism is a stunning work of intellectual pyrotechnics.

It has brought to light cavernous gaps in my reading that I plan to close in the years ahead. I’ve compiled below some plans for further reading around the themes of Postmodernity and Theory below. If you have suggestions of other titles or directions that might prove rewarding please comment and let me know. (I will write about Wallerstein’s Historical Capitalism, which I also read recently).

11 thoughts on “Fredric Jameson’s Postmodernism, or The Cultural Logic of Late Capitalism”