A word can sometimes snag and spend you spinning through a chain of associations. Listening to The Mills Brothers’ recording of Cole Porter’s Miss Otis Regrets (recorded most memorably by Kirsty MacColl and The Pogues) led to The Mills Brothers’ sentimental song Be My Life’s Companion, a song that bafflingly chokes me momentarily with its saccharine lyrics. Written by Bob Hilliard, lyricist for the film score of Disney’s Alice in Wonderland, the song has been recorded by diverse artists including Louis Armstrong and Rosemary Clooney.

It is the word “companion” that snags, not in common usage these days. Old women sometimes have “lady’s companions,” slightly less elderly women that help and live with them. It is also less often used as a euphemism for a courtesan, not a prostitute but described in the urban dictionary as “a cross between the oriental-style Geisha and the classic courtesan of renaissance Italy.”

Curiosity about the word’s derivation sent me to my battered  twelve-year old Chambers’ Dictionary of Etymology. Emerson wrote, “The etymologist finds the deadest word to have been once a brilliant picture. Language is fossil poetry.” I was pleased to see that the word, originally “companioun,” came into the English language from pre-1300 romantic poem, Arthour and Merline: A Metrical Romance. 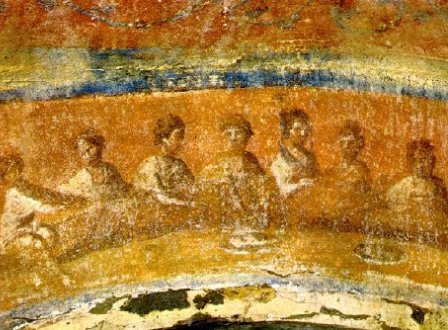 Derived from Old French “compagnon” fellow, mate, friend, partner and from Late Latin “companionem,” the word literally means one who takes bread with someone, the Latin  “com”-together and “panis”-bread. We use the term “breaking bread” as a metaphor for having a meal together.

In Latin “breaking bread” is “fractio panis,” the name given to a fresco in the Catacomb of Priscilla in Rome, which depicts six men and a woman, traditionally interpreted as the chalice of benediction, blessing and breaking of the bread. Art historian Dorothy Irvin interprets the fresco as archaeological evidence that women presided over the Eucharist in the early Christian churches.

In Japan, “kagami biraki” is a traditional ceremony translating as “breaking of the mochi” or “opening the mirror,” a 300 year old ceremony usually conducted at weddings and other significant events. The ceremony involves breaking open a mochi (soft round rice cake) or a saké barrel as a symbol of harmony and good fortune.

2 thoughts on “Opening a Chain”