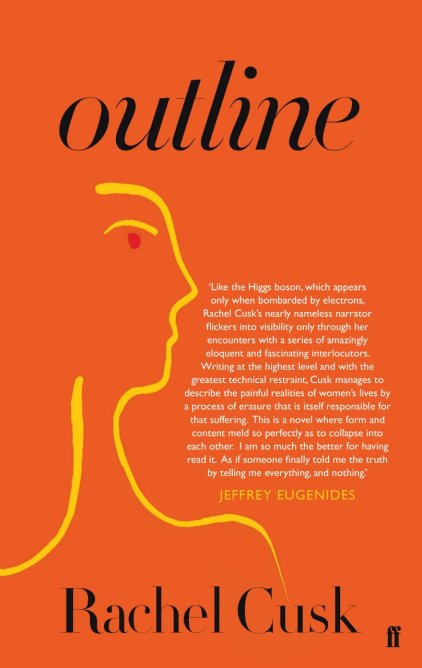 I am the ideal audience for this book, frequently bored with the tyranny of representation, with a deep-seated impulse towards the possibilities in fiction for silence and emptiness. Any serious reader of Beckett knows of the demands made when a writer is seducing readers to follow on a path towards silence. Rachel Cusk’s Outline propels away from representation and towards silence, towards something beyond plot and narration.

Something different is happening with the idea of ‘the narrator’ in Outline. By scarcely defining her narrator–it is jarring three-quarters of the way into the story when we learn the narrator’s name–Cusk leaves a reader with only the scantiest idea of whose eyes we are observing from. Without a typical character-narrator– a propelling force–without an identity to assume, Cusk makes the form take on the steering of its own discourse. Occasionally it teeters under the weight of its own structure, but Outline is nevertheless one of the most fascinating novels I’ve read in years.

Cusk opens up all sorts of ideas about how we define ourselves in telling another of our experience, of the trauma of our lives. She writes, “Yet there was something worse than forgetting, which was misrepresentation, bias, the selective presentation of events . . .” That may be true, yet how do we step outside ourselves sufficiently to rise above our partisan and polemical perspectives? This seems at the heart of what Cusk is addressing, especially as she has said elsewhere, “Autobiography is increasingly the only form in all the arts.”

The quest to gain enough distance to tell all sides of a story, to hear all sides of a story and not only what we can relate to is perhaps a logical path to follow Cusk’s Aftermath, which felt like an inevitably evasive and one-sided account of her divorce. Though Cusk’s writing suggests movement from character to author-surrogate, Outline    adopts a new form to the purely autobiographical Aftermath, which explored similar subjects, though from the obverse side of the mirror. Outline is a more radical innovation using an indefinite voice, deprived of time and purpose. It questions its own being and its way of relating to the world. It will be intriguing to see where Cusk takes this self-exploration in the sequel Transit and the reported last part of the trilogy.