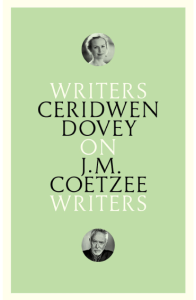 The works of J. M. Coetzee, whom Ceridwen Dovey would discover through her mother’s references to a “mysterious man whom she referred to only as ‘J.M.'”, are fully literature, but could without error be placed in many other sections of the library. He therefore presents a complex task for a critic. For Coetzee’s works are also replete with quasi-religious  and national myths, quasi-rhetorical speeches, fictionalised autobiography, ethics, metaphysics and psychology. The ideal critic must try to equal his breadth of concerns as well as his psychological depths. It isn’t surprising that most critics fail to write intelligently about Coetzee’s work. However many times you read his books, there is always more to question, more to try to understand.

For Ceridwen Dovey, in her beautifully presented book, part of a Writers on Writers series, interpretation is not her challenge. She does not ask us to believe anything. Her mother, who is truly the book’s subject, a Coetzee scholar, stops trying to unpick his work: “She now thinks that applying theory to his novels, using reasoned critical discourse to dismantle and decode them, may have been fundamentally against the grain of what the novels themselves ask for.” It is a perfect conclusion to a book Dovey has clearly enjoyed writing, in which readers are not bullied into taking a writer’s line and are instead encouraged to think for themselves.