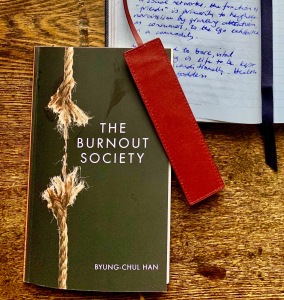 “The attitude toward time and environment known as “multitasking’ does not represent civilisational progress. Human beings in the late-modern society of work and information are not the only ones capable of multitasking. Rather, such an aptitude amounts to regression. Multitasking is commonplace among wild animals. It is an attentive technique indispensable for survival in the wilderness.”

“Not just multitasking but also activities such as video games produce a broad but flat mode of attention. Recent social developments and the structural change of wakefulness are bringing human society deeper and deeper into the wilderness.For example, bullying has achieved pandemic dimensions. Concern for the good life, which also includes life as member of the community, is yielding more and more to the simple concern for survival.

We owe the cultural achievements of humanity—which include philosophy—to deep, contemplative attention.”

The devastating effects of an excess of positivity on the social and cultural realm are explored in Han’s book. It’s a bleak portrayal of a post-Freudian west distracted by low-level stimuli in order to stave off inner emptiness. For a book published in 2010 it seems quite prophetic. Nine years later there seems little doubt of the gulf between the political establishment and a population for whom celebrity culture, consumerism and wealth acquisition have become the principal ideologies.