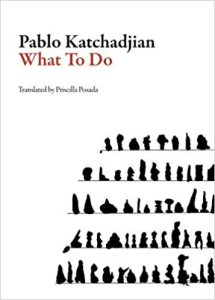 You could imagine Pablo Katchadjian’s What To Do as narrating the dreams of Lars Iyer’s two philosophy professors from his extravagantly silly trilogy of novels – Spurious, Dogma and Exodus. It has the tense humour of commedia dell’ arte, a complex improvisation built on a multiplying set of objects and scenarios.

In Katchadjian’s dream sequence narrative, multiple dreams within dreams reverberate like a two-voice sonata as the nameless narrator and his companion Alberto play a rhythmic association game with themes and counter-themes. Each of the dreams carries an individual signature but there are recurrent themes of humiliation, lack of communication, death and anxiety.

As in dreams, there is no conclusion, just a sense upon awakening of the instability of identity. What To Do isn’t incoherent and I suspect if I mapped out the cyclical dream elements I might find an underlying structure; the outcome of each episode moves in gradations to the ministructure of the next. The novel’s ninety-nine pages are best read in a single sitting, perhaps as an indulgent bracer between other books.