In yesterday’s post on This Space, Steve commented in passing that Time’s Flow Stemmed recently celebrated (25th January to be precise) its tenth anniversary. While I did mention the milestone on Twitter I forgot to mark the occasion here, so in observance of this blog’s first decade, over five-hundred years after Martin Luther apparently nailed his treatise to the door of Wittenberg’s church, I offer my own 33 theses, random reflections and treasured quotes:

To those that read Time’s Flow Stemmed, whether for a decade, or as a recent discovery, I offer my profound thanks. I used to explain that I wrote here for myself, but that is the worst kind of deceit, a self-deceit. I am thrilled that this blog has readers and offer an apology that I am even further from understanding literature than I was at the beginning.

“We learn to read Middlemarch in the probing light of James’ treatment; we then return to The Portrait of a Lady and come to recognise the transformative inflections of its source.”

It is an idea of Steiner’s that I like, his contention that we can think of a reversal in chronology, in that we understand Eliot’s earlier novel better through the reading of the latter. As Christopher J. Knight writes in Uncommon Readers, “James reads Middlemarch, and then writes The Portrait of a Lady. Is the James novel art or criticism? In Real Presences, Steiner contends that it is both.”

In an early review, Edith Simcox described Middlemarch as like ‘a Wilhelm Meister written by Balzac’; George Eliot’s first biographer, Mathilde Blind, compared her to George Sand, Honoré de Balzac and Gustave Flaubert. So, it seems only natural to finish Balzac’s Père Goriot and then read Middlemarch, followed perhaps by The Portrait of a Lady.

Middlemarch is, of course, fascinating and steeped in Eliot’s profound knowledge of European literature and culture. Her passion of the mind is clear, and I like the book’s intensity and seriousness. You can find in Miriam Henderson, the central character in Richardson’s Pilgrimage much in common with Eliot’s Dorothea, that awareness of the impossibility of knowing what is ‘other’, nor even ourselves completely, subject as we are to the lure of imagined states and compelling metaphors.

Dorothea also suggests Zbigniew Herbert’s Mr Cogito and the Imagination (so beautifully translated by Alissa Valles). It is a favourite poem that is never far from my mind.

“he longed to understand fully

A reference in George Steiner’s great essay Real Presences sent me in search of references to Fritz Mauthner’s influence on Samuel Beckett, and specifically Beckett’s development of scepticism about erudition.

“Beckett came in contact with Mauthner’s Beiträge zu einer Kritik der Sprache during his second collaboration with Joyce. For a long time it was thought that Beckett had read passages from Mauthner out loud to Joyce, helping him with preparations for Finnegans Wake. In reality Beckett was asked by Joyce to read the volumes himself. Beckett ended up engaging even deeper with the Beiträge, as he extracted a number of entries and included them in the “Whoroscope” Notebook. The length of the verbatim notes suggests Beckett did not own a copy at the time. Later, Beckett did acquire a copy of the Beiträge zu einer Kritik der Sprache. However, it can only have come into Beckett’s possession after 1954 when he wrote to the German translator Hans Naumann saying that he would have liked to re-read it after the collaboration with Joyce but that it was difficult to find a copy. Beckett preserved his heavily marked three-volume collection until the end of his life in his personal library.

The influence of Mauthner’s Beiträge zu einer Kritik der Sprache is one of the most relevant to Beckett Studies, equally important as Descartes or Geulincx. In her seminal article, Linda Ben-Zvi presents Mauthner’s stance on language in the Beiträge. According to his philosophy, language encompasses many meanings, including knowledge. By “systematically denying [the] basic efficacy” of language, Mauthner indirectly argues for the ultimate failure of knowledge. However, one cannot discuss the limitations of language by avoiding the medium of linguistic communication. To Ben-Zvi this is equivalent to “the possibility of using language to indict itself”.[My bolding].

A similar argument can be made to explain Beckett’s changing perspective on erudition. In his works, he resorts to knowledge in numerous ways, ranging from an encyclopaedic to a deliberately superficial use of allusions. After Murphy, Beckett revised his use of language as shown in the 1937 letter to Axel Kaun, as well as his relation to the knowledge he had acquired until then. Reading Mauthner at this point in his writing career coincided with his turn to not only linguistic scepticism, but also to a scepticism with regard to erudition. In Watt, Beckett’s resort to intertextuality is diminished substantially in comparison to the previous novels. More importantly, when present allusions are treated less explicitly. Beckett deals in this manner with the problematic question of erudition without excluding the use of external sources.

The theme of complexity from the TCD lectures returns in Watt, this time through the filter of Fritz Mauthner’s ideas and Beckett’s creative reworking. From Mauthner’s Beiträge zu einer Kritik der Sprache, Beckett extracted the idea that the inner world is unknowable because there is no language to express it, since language is a system created only for external experiences. Reading Mauthner must have appealed to Beckett due to a number of aspects discussed in the TCD lectures. More precisely, it resonated with his own interpretation of the mind in Racine’s plays, according to which the mind is a hermetic organ that cannot be accessed or explained.

Beckett’s connection with the treatment of the mind includes the presentation in chapter 6 in Murphy: instead of the true picture of the “apparatus”, the interest lies in “what it felt and pictured itself to be”. Watt in his turn applies the dualism between the inner and the outer world: “For Watt’s concern, deep as it appeared, was not after all with what the figure was, in reality, but with what the figure appeared to be, in reality. For since when were Watt’s concerns with what things were in reality?”. Complexity is in this way linked to the fragmentation of mind also in Watt, as it is in Racine. ” 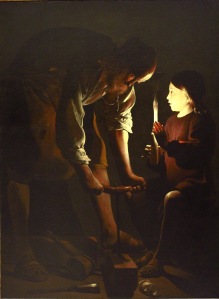 Lost on none of the regular readers of this blog is my plummet headlong down a George Steiner rabbit hole, which may continue unabated until I’ve read all of his appreciable oeuvre. When outlining my reading intentions less than a month ago I warned of my fickle reading disposition. If you dislike Steiner’s work–he is a writer that attracts both passionate critics and acolytes–you may wish to ‘look away’ for a further few months.

Presently I am reading Real Presences in which he argues that “Where we read truly, where the experience is to be that of meaning, we do so as if the text (the piece of music, the work of art) incarnates a real presence of significant being”. The argument and Steiner’s wager of transcendence may prove unsuccessful but undoubtable is its force, virtuosity and autobiographical engagement.

The more I read of Steiner’s work the more I’m convinced that he is our age’s Montaigne or Dr. Johnson, not to be diminished by the term ‘critic’, which would suggest a purely parasitic relationship to literature and the arts, but a writer to which we can attribute ‘greatness’ as the most acutely sensitive reader of our age. Steiner often defends what he calls his “old” critical approach, “when the work of art invades our consciousness, something within us catches flame. What we do thereafter is to refine and make articulate the original leap of recognition”. This approach, abetted by Steiner’s astonishing polymathic erudition casts brilliant light on whatever the target of his attention.

“When God sings to Himself, he sings algebra, opined Liebniz.” p.18

“Sentences, oral and written (the mute can be taught to read and write), are the enabling organ of our being, of that dialogue with the self and with others which assembles and stabilises our identity. Words, imprecise, time-bound as they are, construct remembrance and articulative futurity. Hope is the future tense.” p.21

This dialogue, Steiner’s The Poetry of Thought, a dialogic embrace of metaphysics and literature, thrilling as any novel, a book of life, a book for life, one I have no desire to leave. Pencil in hand, note-taking. Lashings of tea.

“To listen closely–Nietzsche defined philology as “reading slowly”– is to experience, always imperfectly, the possibility that the order of words, notably in metrics and the metrical nerve-structure within good prose, reflects, perhaps sustains the hidden yet manifest coherence of the cosmos.” p.34

“Does difficulty in the Phenomenology and the Enzyklopadie prepare that in Mallarmé, Joyce or Paul Celan, the displacement of language from the axis of immediate or paraphrasable meaning as we find it in Lacan or Derrida (an annotator of Hegel.)” p.88

“Is it possible to reconcile the hermetic with the didactic?” p.88

“What was, lazily, deemed fixed, eternal in the conceptual–that Platonic legacy–is made actual and fluid by the breaking open of words.” p.89

“The muteness of animals remains vestigial in us.” p.90

“Stricto sensu consciousness should revert to silence. Beckett is not far off. Yet only language can reveal being.” p.91

“Human labour both manual and spiritual defines the realisation of the conceptual. This insight translates into the fabric of a Hegelian treatise. The reader must work his way through it. Only the laborious in the root-sense can activate understanding. Passive reception is futile. Via the hard labour of concentrated intake “disquiet is made order” in our consciousness.” p.93

“Hegel produces ‘anti-texts’ aiming at collision with the inert matter of the commonplace. They are, says Adorno, ‘films of thought’ calling for experience rather than comprehension.” p.96

“There was darkness also in Bergson’s outlook, notably toward its close. But he did not wish to extend such darkness to his readers.” p.127

There’s a lifetime’s reading here just tracing the patterns of Steiner’s thought. More than one lifetime.