Finished reading Istanbul: Memories of a City by Orhan Pamuk, a book I almost abandoned on a couple of occasions, struggling with its insipid writing style. Through a series of thematic essays, Pamuk scrutinises Istanbul, his family and growing up in the city, through an engagement with the work of other writers, photographers and painters. There is just enough charm to impel, but hindered by a narrative crammed with an exuberance of ill-assorted facts.

Visiting Istanbul this month with my daughter provided just enough provocation to wade through the pages that resemble an exhibition catalogue. I’ve not read Pamuk before, and most of the book left me ill-prepared for the last half dozen chapters where the writing soars if not to sublimity, but definitely to a type of grandeur.

I finished Istanbul today because I felt like nothing else but reading in the garden, bathed occasionally when the sun shook off the clouds. I read Istanbul, with a Beethoven piano sonata in the background, the first book I finished reading this month and the first since Doctor Faustus. By the final pages I’d grown rather attached to Pamuk’s book, which like its eponymous city, makes few concessions to its readers. 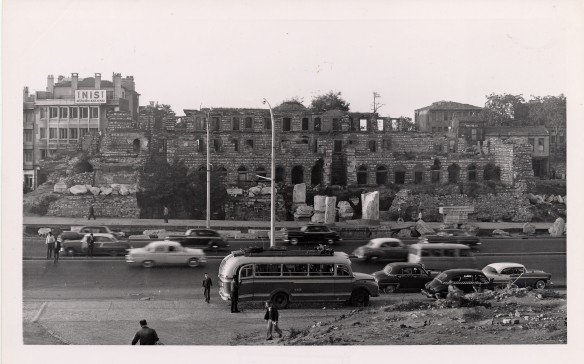 Last week, I took Orhan Pamuk’s Istanbul to the city that is its subject, but read very little. Istanbul, whose siren’s call I’ve heard since watching Nuri Bilge Ceylan’s crazy films, left little time for reading. It is a hypomanic city, caught between projection and reality, between time and space. I found it almost impossible to reach beyond the city marketed to consuming tourists.

Visiting Sufi lodges was the highpoint of the trip. Away from the tourist trail I found some essence of Istanbul, a city that resists cognition. Discussing breath-control and visualisation with a patient scholar reminded me also to return to reading Roberto Calasso’s Ardor as soon as practicable.

Pamuk’s Istanbul returned with me to London mostly unread. The insipidity I found in Snow is, if anything, more glaring in Istanbul, but it has enough charm (aided by Ara Güler’s photographs) that I shall attempt to finish it this weekend.

What is now Orhan Kemal Public library, once the Istanbul Public Library, is pictured above, clearly before restoration was completed in 1976. Its collection of rare books includes Arabic and Persian translations of the four Vedas, the subject of Calasso’s Ardor, but a holidaying curator made it impossible to inspect the works, though I saw many other manuscripts in exquisite calligraphy.

Over the last few weeks, I’ve been an unfaithful reader, distracted by non-literary forms of communication and trying to flit between too many books. Like Murphy, I’m bouncing ‘off the walls like a blue-bottle in a jar’. I concentrate better on a single book at a time.