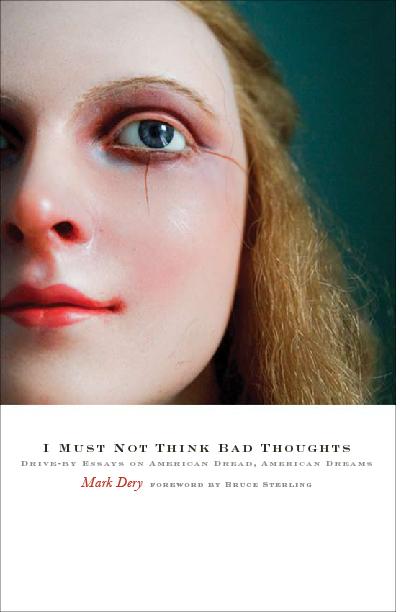 Mark Dery’s I Must Not Think Bad Thoughts: Drive-By Essays on American Dread, American Dreams is not as unconventional as built up in either the forward or introduction. In the foreword Bruce Sterling attests to reading “every Mark Dery book ever written” adding,

Mark has exotic tastes, but he’s a thinker of consequence, ever keen to deflate fraud and to combat superstition. He scouts the terrain of counterculture-he’s a botanist of countercultures, really, always unearthing new species in unlikely niches-and he takes careful notes.

Having found the cult, he judiciously sips the Kool-Aid. He’s an oenophile in those matters: you can witness him sniffing he Kool-Aid, rinsing his molars, extracting the full bouquet. Then he spits.

In his own introduction, Dery unfurls his approach to countercultural botanism:

Thinking bad Thoughts is above all else a refusal to recognise intellectual no-fly zones. In America, that translates as the rejection of bred-in-the-bone Puritanism; bourgeois anxieties about taste; the self-censorship routinely practised by academic, fearful of offending tenure committees and blinkered by elite assumptions about what constitutes “serious” subject matter and “scholarly” style; the craven capitulation of Hollywood and the news media, phobic of truly controversial content that might scare off advertisers or upset Middle America’s mental digestion.

Appetite whetted, it was by the end of the second section that I flicked to the front pages to check whether it was a reprint of a book originally published in the early nineties. This check revealed a publication date of this year. Perhaps the internet, by offering admittance to every possible permutation of counterculture, has neutered the impact of Dery’s curation of truly controversial content, but the subjects of his essays seemed rather mild. As to his sipping of the Kool-Aid, Dery’s essayistic approach seems more voyeuristic than participatory; emailing sexologists is as close as Dery gets to participating in the counterculture.

As it happens, though Dery’s interpretation of counterculture is less extreme than suggested, the essays are first-rate, written with sharp-wittedness and elegance. My favourite essays are mostly in the first section, that takes a broad sideswipe at American culture. Manhood, American-style, comes under scrutiny in two exceptional essays decoding suppressed homosexuality in American football and men’s fear (homophobic and misogynistic) of labels like wimp or wussy. (As someone who took a beating in school for writing about the suppressed homosexuality of football and rugby culture in the UK I chortled all the way through ‘How Gay is the Superbowl’.)

Curiously the essay subtitled On Blogging, in the second section on making sense of the digital future, starts off with promise. I expected to squirm as Dery put under the microscope “those self-declared Masters of Their Own Domain whose ponderous prose, comic sense of self-importance and weird refusal to use contractions makes them sound like the genetically engineered offspring of Ted Koppel and Galactus”. The argument is valid, if not original, but to offer up Boing Boing and Kottke as torch-bearers of idiosyncrasy or ‘beautiful’ alternatives to mainstream media is feeble.

In the last two sections Dery turns his analysis to religion and the grotesque. As far as I can tell, these are the essays written to shock. Thirteen Ways of Looking at a Severed Head stands out with its paean to the guillotine. Apparently thirteen-seconds is how much consciousness remains after your head is cut off. Again the essays are erudite and executed with wit and beauty, but disappointingly I failed to be shocked.

From reading a compelling review in TLS’s In Brief to tucking into Mark Dery’s I Must Not Think Bad Thoughts was an interval of three days. I’m one foreword, an introduction and a single essay in, and I’ve got that familiar, but rare, tingle. I know IMNTBT and me are going to pleasurably commingle.

The ethos of Thinking Bad Thoughts isn’t synonymous with the wilful perversity of Christopher Hitchens’s contrarianism, or with H. L. Mencken’s lifelong devotion to spit-roasting the sacred cows of the booboisie, or with the nothing-is-true, everything-is-permitted libertinism of William S. Burroughs, or with the liberators cynicism of punk rockers like X, or with Orwell’s ability to confront hard truths without flinching. Yet it contains a tincture of each.

Dery’s introduction is a manifesto for this intellectual onslaught on the ‘friendly fascisms of right and left’ and an outright refusal to ‘recognise intellectual no-fly zones’, inspires.

His first essay Dead Man Walking contrasts the reanimating of the zombie myth in contemporary literature and film to its previous incarnation in the 70s and 80s.

In the postwar decades, as suburban sprawl and mall culture metastasized across America, Hollywood cast the zombie as the decaying face of popular ambivalence toward amok consumerism. Implacable consumption machines, the mall-crawling dead of Georg Romero’s Dawn of the Dead (1978) liberalised the infantile psychology of consumer culture, with its oral fixation, insistence on instant gratification, and I-shop-therfore-I-am sense of self-worth, indexed to how pricey your status totems are-the sheer bodaciousness of your insatiable orality implied by market capitalism’s redefinition of citizens as consumers-“wallets with mouths”, in the cynical parlance of Madison Avenue is instructive.

Now that the econopocalypse has thrown millions out of work,triggered an upspike in homelessness, and eaten the braaains of consumer confidence, the zombie has undergone a role reversal, incarnating American fears that the republic is a shambling shadow of its former glory, Left 4 Dead by the near meltdown of the financial system. Zombies are the Resident Evil of an economy whose moribund state confronts us everywhere we look in a landscape littered with dead males, “ghost boxes” (dark, shuttered big-box outlets), and “zombie stores”-retailers forced by dismal sales to reduce their inventory to its bare bones, with the ironic consequence that their emaciated stock and empty floor space scare consumers away, accelerating their death spiral.

Is that enough to tempt you to dive in and read along? I could just have quoted Dery’s listing of “Noam Chomsky’s Top 10 List of Things You Can’t Say on Nightline: “The biggest international terror operations that are known are the ones that are run out of Washington; if the Nuremberg laws were applied then every postwar American president would have been hanged; the Bible is one of the most genocidal books in the total canon; education is a system of imposed ignorance…” but that would be too easy, and I assume you’ve all seen Manufacturing Consent.

List time: books that influenced me. Influence is defined as either life-changing or transformative in reading patterns (which equates to the same thing). These are roughly in time order. Later I may explain what changed as a consequence. Here’s the list: