Reading writers like Mathias Enard and Tomasi di Lampedusa is not only greatly entertaining but also cajoles me to read only the best books. Both writers wear their massive erudition lightly. Gilbert Highet, the Scottish-American classicist used the terrific phrase (to which I aspire, true to autodidactic form): “a well-stocked head and a better stocked library”.

I started this year with the intent of reading widely, dipping into the ocean of contemporary literature. For every Mathias Enard, I abandoned another dozen frightful books, none of which wasted my time but served to further teach me what to avoid. My literary taste remains omnivorous but I shall default to the late D. G. Myers advice: “Read no book before it is ten years old (in order not to be influenced by the buzz”. I shall of course occasionally, whimsically ignore that advice in the hope of discovering more writers like Mathias Enard and Rachel Cusk. Very, very occasionally the hyperbole is justified.

The best books are inexhaustible and capable of transforming, for a time, how we perceive the world. My reading life is ruled by serendipity, one book leading to another. Enard, for instance, prompts me to reread Annemarie Schwarzenbach, Edward Said and Claudio Magris, also to explore the work of Isabelle Eberhardt, Ernst Bloch, Georg Trakl, Sadegh Hedayat, Faris al-Shidyaq and Leopold Weiss.

For the time being though I’m taking a detour, one I take regularly, back to older books, to the hymns of Homer via Peter McDonald, and to a recent edition of Gilbert Highet’s The Classical Tradition: Greek & Roman Influences on Western Literature. This might then be a gateway to Werner Jaeger’s Paideia: The Ideals of Greek Culture, translated also by Gilbert Highet. 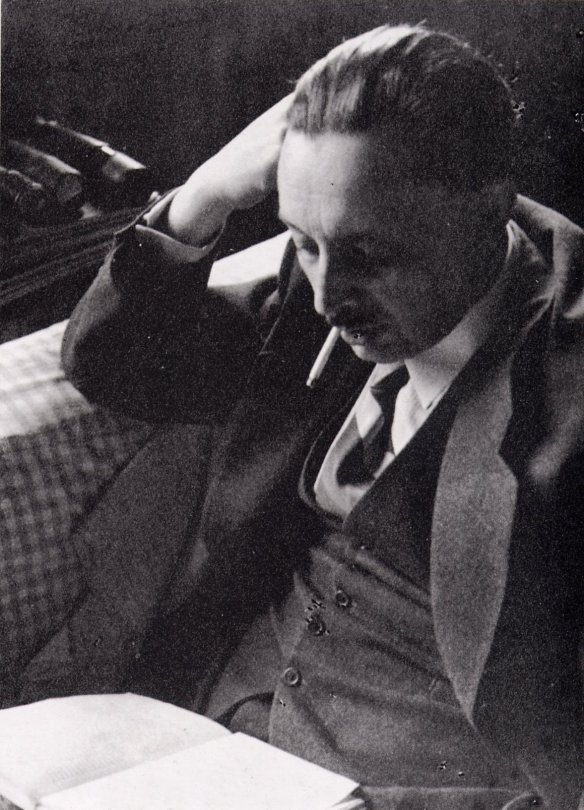 “Prince Giuseppe di Lampedusa has meant so much to me that I find it impossible to present him formally.” Written by E. M. Forster in his introduction to Two Stories and a Memory, continuing, “His great novel The Leopard (Il Gattopardo) has greatly enlarged my life–an unusual experience for a life which is well on in its eighties. Reading and rereading it has made me realise how many ways there are of being alive, how many doors there are, close to one, which someone else’s touch may open.” In these sentences, Forster reminds me of Woolf’s words: “It is the gift of the novel to bring us into close touch with life.”

Forster captured something essential of the The Leopard, once calling it “That great lonely book.” Somehow in considering briefly its themes of all-pervading decay and mortality, what was less obviously apparent, until stumbling over Forster’s phrase, is that the novel is suffused with ideas of aloneness, loneliness, and alienation. It is easy to see The Leopard’s appeal to Forster, whose novels are, in different ways, ruminations on our yearning for transformative connections. Connection eludes the elderly Prince of Salina. Lampedusa’s story seems to suggest that the language we use to connect to other human beings is filled with misunderstanding and might itself be the barrier that prevents communication.

Every book is the outcome of a period of aloneness, and each reader’s experience with a book a way of being in communication with another mind. Perhaps a particular appeal of literature is to those that find such connections particularly elusive. The Leopard resists simple generalisation but is a sublime expression of human loneliness.

In my enchanted state after finishing The Leopard, I chose to read David Gilmour’s magnificent biography of Lampedusa, The Last Leopard, curious how important the autobiographical drive behind this novel was. Gilmour confronts this question, eventually agreeing with Lampedusa’s English translator Archibald Colquhoun who writes, “Don Fabrizio is neither historical symbol, family memoir, self-portrait, nor wish-fulfilment, and yet something of all four.”

After writing The Leopard, Lampedusa, late in life, crossed a threshold of creativity, going on to write two further stories and even a new novel. He begun a memoir and wrote over a thousand pages of literary exegesis. His story entitled The Professor and The Siren is a magical fantasy about a professor’s life changing encounter with the Siren Lighea, daughter of Calliope. Lampedusa proposes a revision of the myth of the Sirens, “Don’t believe the stories about us. We don’t kill anyone, we only love.”

If you aren’t following Robert Minto’s blog you’re missing some thought-provoking posts on the essence of criticism and blogging. I’ve been contemplating his On Apophatic Criticism post, which scrutinises, in part, Stephen Mitchelmore’s approach to criticism on my favourite book blog This Space.

Minto also categorises criticism into five varieties. I’m not sure how he would classify my writing about books, “book chat” perhaps; like astrology, I see elements of what I attempt in a number of his categories.

My interest in literature, and art in general, is shaped by curiosity about how others perceive or know the world. How do others perceive some thing (abstract or material) as a distinct object of perception, and how does this compare with my understanding. Kant says we don’t perceive things in themselves: “What may be the case with objects in themselves and abstracted from all this receptivity of our sensibility remains entirely unknown to us. We are acquainted with nothing except our way of perceiving them.” I’ve never quite understood why everyone isn’t as haunted with this suggestion as I am. Perhaps they are, but don’t feel a need to create a blog to  babble on about it. As a consequence, I’m naturally intrigued with literature as literary object, about words, sentences, form and so on, but from a conviction that literature engenders an imaginative perceiving that is transformative, for a time at least, of the world before us. To read literature with sympathy, intuition, intelligence, comprehension and grace enriches perception and deepens our interpretive function. 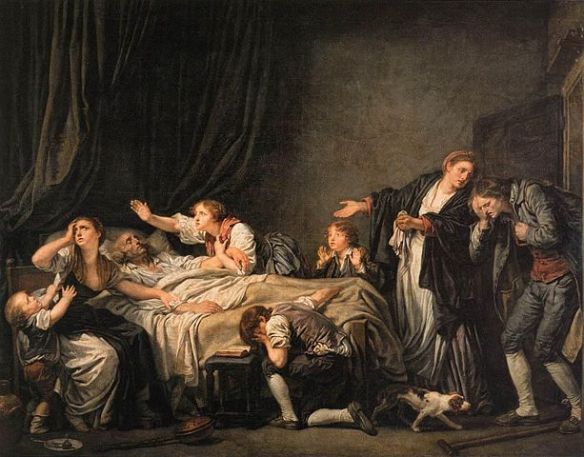 Reading Lampedusa’s The Leopard this week, in which Greuze’s painting is given a structural and thematic role depicting the twin themes of decadence and sexual indulgence in the context of the story’s overarching theme of death. The painting leads into the beautiful final chapters, ‘Death of a Prince’ and ‘Relics’ in which Fabrizio determines that he has truly lived only two or three years of his life–all else was just boredom and pain. The painting reinforces Lampedusa’s autobiographical story about the social decline of his noble family into the middle classes.

If a reading of The Leopard begins with a sense of the book’s seductive prose and its inherent melancholy, where does the transition happen from a perception of the book as a work of literature to a transformative experience? What happens when we interrupt “normal’ life to occupy ourselves with something that isn’t of our life but enriches it in an unexpected way, giving it, if one is lucky, a new, deeply felt meaning? Exploring these questions are what compels me to read and to write about that experience on this blog.

“Mr Pickwick belongs to the sacred figures of the world’s history. Do not, please, claim that he has never existed: the same thing happens to most of the world’s sacred figures, and they have been living presences to a vast number of consoled wretches. So, if a mystic can claim a personal acquaintance and clear vision of Christ, a human man can claim personal acquaintance and a clear vision of Mr Pickwick.”

“He would have sacrificed ten years of his life, he once remarked, for the privilege of spending an hour with Sir John Falstaff.”

“He never left his house, recalled Licy, ‘without a copy of Shakespeare in his bag, with which he would console himself when he saw something disagreeable’; at his bedside he kept The Pickwick Papers to comfort him during sleepless nights.”

“Many men with no great claim even to mere wit could have made most of Shakespeare’s jokes, as jokes. It is in the creation of the figures who make those jokes that genius underlies wit; not what Falstaff says but what Falstaff is is great. The genius made the figure; the wit made it speak.”

I’m back from my travels, and circumscribing Pessoa like a terrier trying to find a way into a rathole. I’ve also caught up on some stimulating blog posts in the alt-lit neighbourhood:

Have you read Lampedusa? I’ve owned the Everyman edition of The Leopard for 15 years but never read beyond 100 pages, though I enjoyed each one of them. This post at Anecdotal Evidence links to an excellent essay by Javier Marías, in which he writes:

“The few people who knew him well were astonished at his encyclopedic knowledge of literature and history, on both of which subjects he possessed a vast library. He had not only read all the important and essential writers, but also the second-rate and the mediocre, whom, especially as regards the novel, he considered to be as necessary as the greats: `One has to learn how to be bored,’ he used to say, and he read bad literature with interest and patience. Buying books was almost his sole expense and sole luxury.”

Isabella at Magnificent Octopus is documenting her reading of Lispector’s The Passion According to G.H. Of course, I immediately want to reread Lispector’s elusive work that pushes at the extreme possibilities of language.

Pykk is unpacking Arno Schmidt’s Collected Stories, 1996, and his longer School for Atheists: a Novella = Comedy in 6 Acts, 1972.

Joe at roughghosts is discovering the wonder that is Mahmoud Darwish’s Journal of an Ordinary Grief, which a dear friend introduced to me some years ago.

Scott W. at seraillon writes compellingly about Emilio’s Carnival and makes it likely I’ll get to Svevo’s work sooner than later.