There is nothing like refitting a library to make one appreciate how extensive a reading-backlog has somehow established itself as an almost living being. It makes me think fondly of the Joanna Walsh short story. Her story rests on the irresistible premise that all your unread books might step from your shelves in the shape of a polyphonous reader to share with you some conversation and a glass of wine. (I recently contributed a personal selection of short stories, which included Walsh’s story, to Jonathan Gibbs’ terrific A Personal Anthology.)

I am trying to buy fewer books, but these are forthcoming over the next twelve months and will escape any such caution:

There is to me a distinct hierarchy in what falls under the category of life-writing. (I don’t particularly like the term life-writing.) After all, there is life-writing to various degrees in every instance of fiction. Can we still agree with Proust’s biographer George Painter who wrote: “The artist has creative imagination, the biographer recreative”? For me, the most exhilarating trend in modern fiction is the blurring of the boundaries. Fictionality is an inevitable part of autobiography. There is no less artistry in de Beauvoir’s memoirs than her novels, though I’d argue the latter are considerably more successful than the former.

I like novels that exist in the interstices between fiction and autobiography, writers like Tomas Espedal, W.G. Sebald, Peter Handke, Kate Zambreno and John Berger who bring the techniques of fiction to explore autobiography in rewarding ways. Techniques of narratology, such as perspective, temporal structure, and motifs are being used creatively to alleviate the tedium of conventional linear (auto)biography.

In truth, it isn’t a new trend, but something writers to some extent have always done. The threshold between fiction and autobiography in the books of Anna Kavan, Dorothy Richardson, Proust and Virginia Woolf is reasonably thin.

Fiction aside, I prefer memoir to autobiography, autobiography to biography; have a great fascination with writer’s and scholar’s letters and diaries, and like least of all fictional biographies. These designations are simplified without getting into all the other terms used to describe experimental life-writing: autotopography, autofiction, heterobiography etc.

This week I read Jean Echenoz’s Ravel. It’s a short book. I read it twice on a long return train journey, and have spent more time thinking about it since. Why I think many fictional biographies make me queasy is that they use fictional techniques to explore interiority or the subjective essence of a real historical individual. They maintain the freedom of a third-person narrator and yet privilege that narrator with absolute knowledge. To be honest, I struggle with fiction that does the same thing.

Echenoz avoids this trap, and in doing so, can be trusted that the broad story of the last ten years of Maurice Ravel’s life is accurate at a factual level. Ravel then becomes a fascinating exploration into how fame distances its subject from those closest to them. The dramatic reconstruction of Ravel’s unraveling (excuse the pun) and death is disturbing, but Echenoz preserves the emotional distancing to defer a reader’s sympathy. It’s cleverly done and very rewarding.

What are we to make of a fiction in which the main subject fails to appear? “For now,” writes Alejandro Zambra, “Verónica is someone who hasn’t arrived, who still hasn’t returned from her drawing class.” In The Private Lives of Trees the drama is turned inside out, dismantling the expected protagonist-antagonist tension. When Zambra writes, “When [Veronica] returns, the novel will end,” we know that the protagonist, like Godot, will never appear.

If the self-deception inherent in fiction relies on the portrayal of a representative character we can emulate, or with whom we can sympathise, how stable is a story based on the absence of a central subject? Though Verónica is only tangible through anticipation, she is also strangely present – to recall Berger’s critique of oil paintings of the nude – as the spectator in front of the scene. Everything is addressed to Verónica, yet she is, by definition, a stranger.

Thomas Nagel, in The View from Nowhere writes, “how to combine the perspective of a particular person inside the world with an objective view of that same world, the person and his viewpoint included”. By dismantling a traditional conception of character in fiction, Zambra asks how we equate characters with people, and how we come to believe in characters that are nothing more than verbal abstractions or constructs. 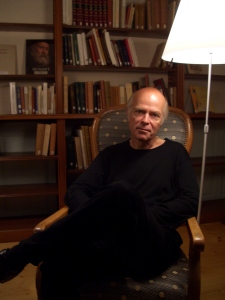 Pascal Quignard’s work belongs in a no-mans-land between what is long since past and what is still to come, reeling on the edges between literature, antiquarianism and philosophy. Texts like The Roving Shadows and Abysses seem so fresh yet also inevitable in terrain carved by writers like Calasso, Sebald, John Berger and Cixous. To find Quignard’s precursors you could go further back to Montaigne, Bacon, even Erasmus.

I have such hunger for these works that find new ways of questioning and expressing knowledge. Quignard’s work demands and refuses easy interpretation in the way that older essayists used the form to test ideas, where cognition proceeds through flashes and rereading (I read The Roving Shadows once before). Structured as a mixture of fragments and lengthier, more structured essays Quignard reflects on the philosophers of Greece and Rome (mostly but not exclusively) interwoven with touches of autobiography and outrage.

I also read Sex and Terror which uses visual arts to explore the edges where Greek civilisation and Roman civilisation overlapped with seismic reverberations that are still being felt in the present day. It is less demanding than the other two, but equally enlightening.

Chris Turner’s translation of all three books (once again from the wonderful Seagull Books) is so beautiful that I intend to collect a couple in the original French to see what I am missing. Quignard’s work is important, moving and powerful in equal measure and deserves to leave a significant trace. He is one of those writers who will divide my life (not just reading) into a before discovery and after.

These are not reading resolutions. Writers promising literary gifts lead me astray too easily for these ideas to be fixed in any way.

Beyond these ‘old chestnuts’ (as Beckett called his favourite authors) I’m looking forward to unexpected surprises within the pages of the following new books, either missed in 2014 or due in 2015, by authors I have not read before:

As always, distractions are greater than my ambition, but if I manage to take in a decent selection of the above I’m expecting a good year in reading. There are several other titles I have my eye on but I’m mindful of your patience and Molloy’s admission that ‘if you set out to mention everything you would never be done.’