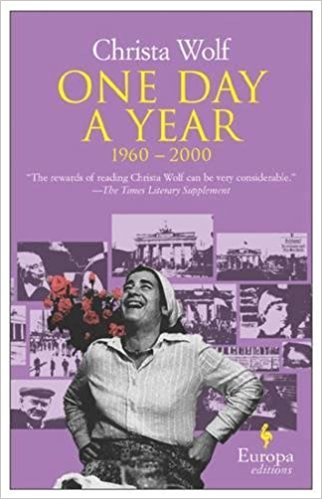 It might seem, at first appearance, a little daunting, this six hundred and eighteen page book that promises to recount in exacting detail One Day a Year for forty years, those between 1960 and 2000. Daunting, unless, of course, you are acquainted with the writing of Christa Wolf, for this will hardly be your first Wolf. If you’ve been fortunate  enough to read her Cassandra, Medea, or the first-rate City of Angels, you’ll already be looking forward to immersing yourself into this autobiography of sorts, of a writer of such high cultural seriousness as Wolf.

Aside from the fascination of following Wolf’s reluctant self-revelation over such an extended time, her book also provides the sublime backdrop of history as Wolf becomes ever more disillusioned with the communism of the German Democratic Republic, whilst retaining an unshakeable faith in the economic–if not humane–ideals of Marxian socialism.

Juxtaposed with the historical context, Wolf writes of her meals with husband ‘Gerd’ Wolf, the books she is reading, her literary friends and influences–Anna Seghers, Nelly Sachs, Günter Grass, Max Frisch and especially Heinrich Böll–and the unfolding lives–birthdays, marriages, divorces–of her daughters. Beneath the macro and micro history lies Wolf’s agonising struggle to escape the boundaries of her recurring depression, realising early the important metaphysical necessity of writing.

It is impossible to read One Day a Year without bringing to mind another writer’s veiled autobiographical works, that of her near-namesake Virginia Woolf. For both writers, writing was a therapeutic act, a way of transposing trauma into literature. Both found it difficult to write about their inner selves. As Woolf wrote so poignantly in The Waves, “But how to describe the world seen without a self? There are no words.”

There are, I suppose, two ways to read a book. Perhaps many more. I tend to inhabit a book, giving rein to a flight of imagination that affords me the opportunity to see through the eyes of a character. Others, I imagine, spectate from afar like viewers at a puppet show.

Observing a writer’s world through their eyes, or sometimes, just the eyes of a particular character, can be so ineffable, so very fertile, that I wish to prolong the encounter for as long as is possible. Another time, reading a book like Max Frisch’s Homo Faber, the view is unsettling, discordant even, which is fecund in a different way, but still worth drawing out, only to emerge after a double reading, anguished but purged

There are writers I wish to engage with to the greatest extent, seeking out all they write: stories, letters, diaries, everything. They offer a rare chance to disturb in some small but permanent way how I conceptualise the world. It is the very best form of escapism, a boundary crossing, a chance to step over a threshold from one self to the other, not just intellectually but on a deep, emotional level. These writers that I set out to read to completion disengage me from myself, silently and profoundly. Who would I be, I wonder, without the alchemical transformation caused by writers like Dante, Christa Wolf, Denton Welch, Virginia Woolf, Mathias Énard, Roberto Calasso, Doris Lessing, Samuel Beckett, Kate Zambreno, Homer.

It isn’t only fiction that provides voluptuous literary encounters. When reading nonfiction, without that distinction between a writer and a writer’s voice, it is possible to develop what feels uncannily like a friendship. Such friends are Gilbert Highet, Walter Kaufmann, Plato, Hélène Cixous, Marcus Aurelius, who have each influenced my life for the better. This intellectual endowment, this gift that is reading, is transformative. Sometimes enchanting, not always comfortable or easy, but that is the nature of friendship.

I bear no guilt for reading fewer books this year than any other in recent memory – I regret only my morbid fascination with the sulphurous news, as the worst aspects of human nature become manifest. My natural refuge in literature has proved insufficient distraction to the horrifying potency of watching vultures tearing at a creature’s entrails, gripped and subdued by the grisly pantomime. I don’t wish to drown in the spectacle. I must find balance and some self-discipline, though only imagine that this year is merely grisly prelude to further gross stupidity and narcissism next year.

It is Jorge Semprún’s writing that proved most alluring this year. In writing Literature or Life, he chose to end a “long cure of aphasia, of voluntary amnesia” to write this lightly fictionalised memoir, controlling and channeling his complex memories of the evil exerted during his incarceration in Buchenwald. I read backwards to the lyrical reticence of The Long Voyage, an almost dispassionate account of the cattle train journey to the concentration camp”. Semprún reassures that it is possible to both write poetically and read about barbarism. Literature or Life is one of those books that sit on one’s shelves for years before one is compelled to read even a sentence. The image that lingers most intensely from Literature or Life is his consideration of which books to take on a return to Buchenwald to film a documentary about the camp. In the end he opts for Mann’s The Beloved Returns and a volume of Celan, who perhaps has written the greatest poems about the Holocaust. Semprún quotes a verse from Celan, “hoping, today/ for a thinking man’s/ future word/ in my heart.”

Another book that languished unread on my shelves was a fine first edition of Helen DeWitt’s The Last Samurai. Greatness resides in this wonderfully singular story of a mother and son obsessed with Kurosawa’s The Seven Samurai. I was swept helplessly along by the the torrent of DeWitt’s thought who brings into her novel not only Kurosawa but Ptolemaic Alexandria, Ancient Greek and Fourier analysis. There is a curious quality to the work –stark, lonely, even sadistic– it is one of the most original novels of our time, original as regards sensibility.

I discovered Max Frisch’s work this year. Frisch’s novels offer up a world where no-one is allowed to rest easy; self is thrown back upon uneasy self. There is no escape. Not that Frisch is without hope; his novels unfold the twisted and often darkly comic search for a way out. It is Homo Faber that made the deepest impression, its melancholy cadences contrasting with the ice burn revelation of an incestuous relationship with his daughter.

This year also gave me Anna Kavan’s haunting imagery. The stories in Julie and the Bazooka and I am Lazarus read like a heightened version of Burroughs’s fantasies. Kavan can be gruesomely funny, but with a richness that lies in her proximity to the sensory and the unconscious. It is the chilling tales of narcosis wards that remain, months after reading these stories, the struggle to awaken from speechless unconsciousness. Kavan’s writing, though piercingly clear, is best taken in small doses for its horror and loneliness weighs numbly on the heart.

I’ve read Christopher Logue’s Homer in part during its long evolution but War Music collects all the parts of his adaption of the Iliad into a single edition. This is Homer channelled through Logue’s erudition and the jarring of modern technology. It is a creative ‘translation that shouldn’t work but Logue invigorates an epic that always appears modern.

As the year approaches its end, Reiner Stach’s Kafka: The Early Years is casting a very strong spell over me, This first volume is the last of three to be published due to an overhanging lawsuit. Auden wrote, “Biographies of writers are always superfluous and usually in bad taste”, but there are a few brilliant, definitive biographies that count as essential. This and Stach’s companion piece Is that Kafka? restore Kafka from cliché so we might return to his writing anew.

Here is a list of the 55 books I’ve read so far this year.

One of my favourite literary magazines, The Scofield included my Frisch reading diary in their latest issue, devoted entirely to Max Frisch and his work:

There are writers I read just once and those whose books I read reverently once a year. Reading Sartre’s Nausea transports me to the salt marshes on the Brittany coast where I lay in the grassy dunes and vowed to read this novel every year. This annual tradition unites Sartre’s nauseating stone with the sucking stones which Beckett’s Molloy collects from the shore, another novel I read annually without fail.

There are other writers in whose words, sentences and paragraphs I must immerse myself the way some people soak for hours in hot baths. I devote myself to a single writer’s work and, if I read carefully, get some sense of the contours of their thought, its darkness and yearnings. Over the last year I conversed in this way with Pascal Quignard, Brigid Trophy, Denton Welch and, this February, with Max Frisch.

It was Man in the Holocene that I rest read last summer, a story, on a surface reading of the text, of an old man losing his memory. In his Paris Review interview, Frisch says it was his favourite of his books. The image of haunted narrator Herr Geiser covering his walls in clippings from cut-up books and encyclopaedias stays with me, despite some disappointment with its apparently cheery ending. I suspect that I misread the serenity of its closing pages and maybe I will reread Man in the Holocene. Perhaps knowing its plot, without the suspense, its ethical construct will be more apparent, but I discover that I’ve lost my copy of the book I read last summer, and instead find a handsome edition of Frisch’s An Answer from the Silence. It has waited patiently on my shelves for several months, and this evening was fine accompaniment to a young Barbera d’Alba.

Please read the rest of the diary here [PDF] or at The Scofield.

A new addition to my libraries in fiction collection: the library in Anatol Ludwig Stiller’s studio from Max Frisch’s I’m Not Stiller:

He was looking at the two bookcases. To call what the missing man left behind a library would be an exaggeration. Alongside a small volume of Plato and one or two things by Hegel stood names which today have been forgotten even by second-hand book-sellers; Brecht rubbed shoulders with Hamsun, then Gorky, Nietzsche, and a great many paperbacks, some of which contained opera texts; Count Keyserling was also there, but with the black imprint of a public library; then there were all sorts of art books, especially modern ones and an anthology of Swiss poetry; Mein Kampf was flanked by Andre Gidé and supported on the other side by a White Paper on the Spanish Civil War; there were various volumes in the Insel series, though not a complete set of anything, isolated volumes like Westöstlicher Divan and Faust and Gespräche met Eckermann, Don Quijote de la Mancha, Der Zauberberg, the only work by Thomas Mann, the Iliad, Dante’s Commedia, Erich Kästner, Mozarts Reise nach Prag, also Mörike’s poems, Till Eulenspiegel, then again Marcel Proust, but not the whole of La Recherché, Huttens Letzte Tage, of Gottfried Keller’s works only the Diaries and Letters, a book by C. G. Jung, The Black Spider, something by Arp and suddenly Strindberg’s Dream Play, some early Hesse, too, Chekhov, Pirandello, all in German translation, Lawrence’s Mexico story, The Woman Who Rode Away; a good deal by a Swiss called Albin Zollinger, of Dostoyevsky only The House of the Dead, Garcia Lorca’s first poems in Spanish, Petite Prose by Claudel and Das Kapital, the latter supported by Hölderlin; a few thrillers, Lichtenberg, Tagore, Ringelnatz, Schopenhauer, again the black imprint of a public library, Hemingway (on bullfighting) next door to George Trakl; piles of periodicals ready to fall apart, a Spanish-German dictionary with a very tattered cover, the Communist Manifesto, a book by Gandhi, and so on.