In 100 Days, Gabriel Josipovici, approaching his eightieth year, writes of trying to resist his innate sense of immortality, to be able to approach the inevitability of death with equanimity. It is, I suppose, the only way to contemplate the fact of death, our conspiracy to keep it unconscious a first and necessary line of defence.

Today, prompted by reading Karl One Knausgaard’s The Morning Star, I consulted the tables of life expectancy in England. Unless I get seriously ill or die in an accident I will experience roughly twenty-five more birthdays. Time enough maybe for another couple of thousand books though I do sometimes wonder what I miss when huddled in a fortress of literature. The Morning Star is infuriating and compelling in equal part. It ends with an extraordinary essay that gave me a sense that I should read the whole book again after carefully rereading the essay. I looked up some reviews and learnt that it may have been added as an afterthought and that The Morning Star is the first of a series.

In his novel, Knausgaard refers to a three-volume treatise on death, The Realm of the Dead: A World History, by Olav O. Aukrust. If it exists, it is not translated into English. It is a sufficiently compelling area of study for me to turn to online sources to order Philippe Aries’ The Hour of Our Death, recommended by Daniel, Thomas Laquer’s well-reviewed The Work of the Dead, and successfully look for my unread copy of Robert Pogue Harrison’s Dominion of the Dead (thanks, Steve).

This week I bought Bruce Kirmmse’s new translation of Kierkegaard’s Fear and Trembling and his earlier translation of The Lily of the Field and the Bird of the Air, both also prompted by The Morning Star. In London I also picked up a copy of Vladimir Sorokin’s Day of the Oprichnik, Carolyn Forché’s In the Lateness of the World (primarily for the poem Museum of Stones, but there are several others of interest), Peter Handke’s newly translated essay collection: Quiet Places, and a second-hand copy of William Faulkner’s As I Lay Dying.

This weekend I continued reading George Steiner, a Faber and Faber paperback (1985) edition of his Language and Silence, first published in 1967. Few living writers inspire me to acquire and read all their books. Reading Steiner somehow makes the world feel more understandable. His work merits concentrated, slow reading and note taking. With an average of twenty pages, the essays are perfectly paced to allow time for reflection between each.

Steiner is one those great readers, on a list with Nabokov, Empson and Woolf, who seem to have read everything worth reading. He’s also a terrific prose stylist. In a field (the literary essayist) filled with overinflated reputations and accompanying egos, his literary criticism is erudite, smart and always reaching toward larger themes.

A favourite essay so far is The Pythagorean Genre, ostensibly about the decline of the novel:

“But there are other possibilities of form, other shapes of expression dimly at work. In the disorder of our affairs–a disorder made worse by the seeming coherence of kitsch–new modes of statement , new grammars of poetics for insight, are becoming visible. They are tentative and isolated. But they exist like those packets of radiant energy around which matter is said to gather in turbulent space. They exist, if only in a number of rather solitary, little understood books.

It is not the actual list that matters. Anyone can add to it or take away under the impulse of his own recognitions, It is the common factor in these works–the reaching out of language towards new relations (what we call logic), and in a wider sense towards a new syntax by which to tempt reality into the momentary but living order of words. There are books, though not many, in which the old divisions between prose and verse, between dramatic and narrative voice, between imaginary and documentary, are beautifully irrelevant or false. Just as criteria of conventional verisimilitude and common perspective were beginning to be irrelevant to the new focus on Impressionism. Starting in the late eighteenth and nineteenth centuries, books have appeared which allow no ready answer to the question: what species of literature am I, to what genre do I belong? Works so organised–we tend to forget the imperative of life in that word–that their expressive form is integral only to themselves, they modify, by the very fact of their existence, our sense of how meaning may be communicated.”

Steiner gives some examples of an ‘apparently discontinuous, idiosyncratic series’ that he calls the ‘Pythagorean genre’, beginning with Blake and Kierkegaard, embracing Nietzsche, Péguy, Karl Kraus, possibly Walter Benjamin ‘had he not died early’, Broch, Lévi-Strauss, Wittgenstein, and ending with Ernst Bloch, ‘the foremost living writer in the ‘Pythagorean genre’. 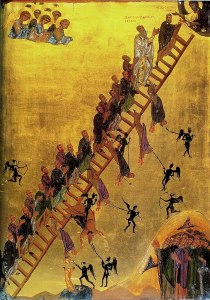 The Ladder of Divine Ascent, Monastery of St Catherine.

“But the genuine subjective existing thinker is always just as negative as he is positive and vice versa: he is always that as long as he exists, not once and for all in a chimerical meditation…..He is cognizant of the negativity of the infinite in existence; he always keeps open the wound of negativity, which at all times is a saving factor (the others let the wound close and become positive–deceived)…..He is, therefore, never a teacher, but a learner, and if he is continually just as negative as positive, he is continually striving.”

“Look, reader, though I do not know you, I love you so much that if I could hold you in my hands, I would open up your breast and in the centre of your heart I would make a wound and into it I would put vinegar and salt, so that you might never rest again, and would live in continual anxiety and endless longing.”

“The unhealed wound pressures the individual into seeking a cure, to be in constant, passionate pursuit of authentic existence. Climacus’ “continual striving” is Unamuno’s “endless longing.”

– Jon B. Stewart, Kierkegaard and Existentialism

“The life of mankind could very well be conceived as a speech in which different men represented the various parts of speech (that might also be applied to the nations in the relations to one another). How many people are mere adjectives, interjections, conjunctions, adverbs; and how few are substantives, verbs etc.; how many are copula?
In relation to each other men are like irregular verbs in different languages; nearly all verbs are slightly irregular.

There are people whose position in life is like that of the interjection, without influence on the sentence– They are the hermits of life, and at the very most take a case, e.g., O me miserum.

Our politicians are like Greek reciprocals (alleeloin) which are wanting in the nominative singular and all subjective cases. They can only be thought of in the plural and possessive cases.

The sad thing about me is that my life (the condition of my soul) changes according to the declensions where not only the endings change but the whole word is altered.”

These are not reading resolutions. Writers promising literary gifts lead me astray too easily for these ideas to be fixed in any way.

Beyond these ‘old chestnuts’ (as Beckett called his favourite authors) I’m looking forward to unexpected surprises within the pages of the following new books, either missed in 2014 or due in 2015, by authors I have not read before:

As always, distractions are greater than my ambition, but if I manage to take in a decent selection of the above I’m expecting a good year in reading. There are several other titles I have my eye on but I’m mindful of your patience and Molloy’s admission that ‘if you set out to mention everything you would never be done.’