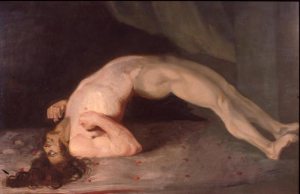 Mortality is the theme of Tolstoy’s The Death of Ivan Ilych, an unrelenting story, after which you will pray that when your time comes, the ending is quick.

The novella opens with Ivan Ilych’s funeral, clear is the self-interest of his widow and colleagues. This same self-interest is at the heart of Ivan Ilych’s life. Bullied by his wife, Ilych indulges his authority as a judge. Tolstoy’s description of the loneliness of the failed marriage is dazzling.

There were still occasional stirrings of affection, but they didn’t last long; they were islets where the couple might anchor for awhile, knowing they’d nonetheless have to set out again on a sea of veiled enmity that was expressed in their alienation from each other.

His preoccupation with power and status comes to an abrupt end when Ilych falls ill. Though he soon learns his illness is terminal, doctors debate the precise diagnosis. With the clarity of those in excruciating pain, Ilych sees the disinterest and disregard of those around him. As he approaches death Ilych sees the futility of his life; in the midst of a harrowing death, he discovers selflessness.

Unlike The Devil, this is a fully developed, outstanding novella. Tolstoy’s depiction of a terminal illness is shredding in its power. A scene in which Ilych’s family stand beside his sick-bed, ready for a night at the opera, is every bit as potent as the closing scene in Kafka’s Metamorphosis.

2 thoughts on “The Death of Ivan Ilych by Tolstoy”