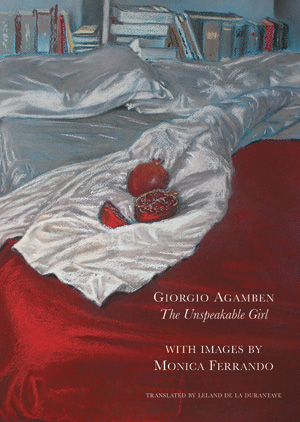 To be sure, it is never language itself, language as such at work, but always am I speaking from a particular angle of inclination of its own self, concerned with outline and orientation. There is no reality, reality must be sought and won.

The statement above, written by Paul Celan in 1958, preceded his recognition that he wrote poems ‘to orient myself, to find out where I was and where I was meant to go, to create a reality for myself’. Such an undertaking is also typical of Beckett’s Malone, who writes daily ‘in order to know where I have got to’. This probing spirit seems to me at the heart of Seagull Books’ publishing project.

How else to provide rationale for publishing The Unspeakable Girl, this exquisitely beautiful book filled with dozens of images by Monica Ferrando?

The essay at the heart of the book is by Giorgio Agamben, a thinker who fascinates me for reasons I haven’t fully understood, perhaps for his ability to produce work that endlessly opens the door for further exploration. In this book Agamben explores a story that has intrigued humanity since ancient times, that of Persephone or, in this case, the ‘unspeakable girl’ whose name was considered ill-omened because of its association with her position as Queen of the Dead.

The myth of the abduction and rape of Demeter’s beautiful daughter as she picked a narcissus (in the Orphic version of the tale) played a central role in the Eleusinian cult and Mysteries, a series of rituals that included fasting and drinking of Kykeon, a hallucinogenic  at the heart of these initiatory rites. The early Christian church expended much energy attempting to suppress the existence of the Mysteries. In the second part of this book Monica Ferrando presents her translations of Greek and Latin source materials.

The audience for this wonderful book, I suspect, is not huge, hence my love and respect for Seagull Books’ inquisitive and curious nature. Agamben, as always, but aided by Ferrando’s images and translations, opens up new pathways for thought into image philosophy, mythology and literary criticism, an encounter that compels wandering in further exploration. The exploration is interminable.