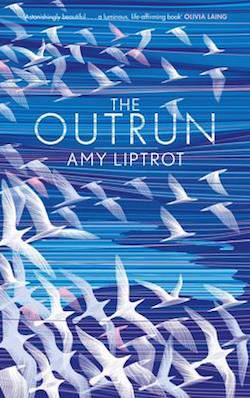 Water also once gathering together began to prevail, as the story goes, when its waves overwhelmed much of the human race; then when all its force, gathered up out of the infinite, being diverted in some way, moved back, the rains came to a standstill and the rivers diminished in force.

The Outrun is interesting in that it isn’t about alcohol addiction. It isn’t misery porn that wallows in abjection. Do Waterstone’s still have that nausea-inducing section called Painful Lives? I only go into Waterstone’s when I know what I want and it’s either contemporary or a classic paperback. There’s little there for me otherwise. If I find The Outrun in that section I’ll move it to Nature Writing though that isn’t quite right either but it’ll get closer to the right audience. The Outrun is about what happens after addiction, not in any generalised way, just what happened when Amy Liptrot stopped drinking.

There’s a strange symbiotic texture here because I know Amy Liptrot from Twitter, or rather I don’t know her but have followed her for several years and have the illusion that I know her. Beyond a brief exchange or two we’ve not even spoken but Amy Liptrot’s free-spirited existence, whether locating male corncrakes in Orkney for the RSPB, wild-swimming in the sea off Papay or living in a beautiful Greek bookshop is always sublimely compelling. As she writes in The Outrun, “I know people on Twitter I’ve never met better than people I’ve sat opposite for months at work or people I went to school with.”

This illusion that you can know someone despite following a catalogue of their days on Twitter is easily dispelled when you read a memoir like The Outrun that reveals the story behind the unconventional existence, which began as a way to elude addiction. Amy Liptrot (this strange knowing-not knowing leaves me uncomfortable with either using ‘Amy’ or Liptrot’ so bear with me) doesn’t shy away from revealing her shoddy treatment of friends and flatmates, the social hells and fucked-up nature of alcohol addiction but quickly moves on to weave observations about landscape and nature with a subtle exploration into the roots of her addictive personality.

Though a contemplative book it isn’t merely a mesh of introspection about personal struggle. Amy Liptrot’s observations about life on the remote islands of Orkney accumulate into some of the most intense and exotic landscape and nature writing available. It is a subtle and moving account of how hard it is to be human among humans, and I very much look forward to any future Amy Liptrot books.

5 thoughts on “Amy Liptrot’s The Outrun”