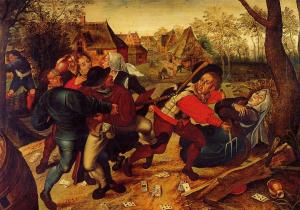 How to live? Is enlightenment  found in hard labour and austerity, or through acquiring knowledge? What is it to live a meaningful existence? These perpetual concerns are Chekhov’s theme in My Life.

Rejecting a professional career, Misail Poloznev, a young nobleman, turns to a life of manual labour and poverty. Censured by his father and derided by small-minded townsfolk, only ‘plump, fair beauty,’ Masha Dolzhikov encourages Misail’s alternative lifestyle. Masha and Misail fall in love, marry, and move to her family’s derelict country home. Though Misail finds a degree of contentment, Masha grows to despise the unruly peasantry and abandons the life that was for her a temporary adventure. Embittered, Misail remains committed to his austere life as a manual labourer.

Chekhov’s response to the questions that underpin this story seem to be that disillusion is at the end of either path. What matters is the choice. Is it possible that Chekhov had access to Kierkegaard?

Longer than many of his stories, in My Life Chekhov also demonstrates his tendency to write strong women characters. Both Masha and Misail’s sister, Kleopatra, are every bit as developed as the main protagonist.

This story was new to me, though I have read very many of Chekhov’s shorter stories, and immediately establishes itself as one of my favourites.

[Read as part of Frances’s and Melville House’s The Art of the Novella Reading Challenge.]

14 thoughts on “My Life by Chekhov”