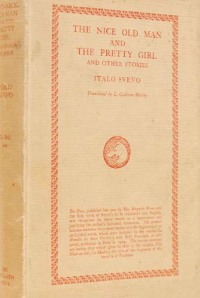 One of those writers I keep meaning to get around to, Italo Svevo’s best known work is The Confessions of Zeno. Svevo was tutored by James Joyce, then an English teacher at the Berlitz school in Trieste. Joyce reputedly used Svevo as his model for Leopold Bloom. This English edition of The Nice Old Man and the Pretty Girl was translated by the Woolf’s Hogarth Press. Translated by Lacy Collison-Morley, the translation was criticised in the TLS review (1931): ” … important qualities of the Italian edition [are] missing from the English translation.”

In common with Tolstoy’s Death of Ivan Ilych, Svevo deals with mortality and sexual obsession. Tonally the two books could not be more different, instead of Tolstoy’s lacerating prose The Nice Old Man and the Pretty Girl has a toothsome, ironic tone. The theme is the perennial morality of old men desiring young women, and the consequences of taking action. My expectations for the book were greater than my enjoyment, but I found pleasure in the depiction of the old man and his moral vacillations.