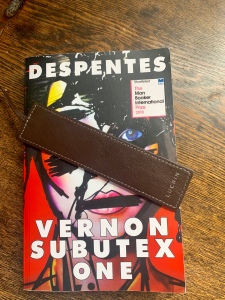 It’s only four years old but has the texture of cyberpunk science fiction, Stephenson’s Snow Crash, that sort of thing, that I read in the nineties. It’s partly the gritty urban realism that provides that cyberpunk taste, though Despentes’ Vernon Subutex I isn’t set in some near future, but navigates the joys and terrors of emerging culture in the present day. There is also the ironic social commentary channeled through the hustlers and alienated street people who exist side-by-side in this grim, violent world.

Style is central, a cynical even paranoid perspective, but without sacrificing completely the characters’ humanity. It is a narrative that is perfectly in tune with our post-war awareness that advanced societies do not by default become more humane or civilised, quite the reverse in fact.

Despentes’ Paris is not the city of Benjamin’s bourgeois flaneur, but more in tune with the concrete jungle of Baudelaire. It also contrasts with Cusk’s confined, rather claustrophobic trilogy of middle-class life, offering an alternative set of keys to understanding the ethical dilemmas of human experience in the late-capitalist modern city.