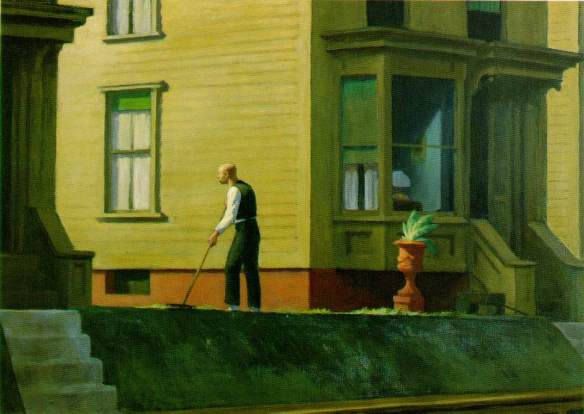 In The Italian Girl, it struck me, as it did last time I read Iris Murdoch’s fiction, that the writer she brings most to mind is Flaubert. Both deliberately adopt narrative techniques to slide between the voice of the narrator and lead character, but what brings them closer together is the sense we are watching the action from outside of the window.

Unlike her contemporary Brigid Brophy, who breathes life into her characters so effortlessly their traces ghost around one’s library for months, Murdoch never seems to climb inside, preferring to be the puppeteer, choreographing the protagonists to explore her theories of power. Perhaps better than Flaubert is a comparison with Edward Hopper, whose characters give us room to fill a space with sweet and grievous yearnings.

Whereas the basic material of The Italian Girl is little different from innumerable fictional family dramas—that complex relationship between an adult and his or her mother—Murdoch’s extravagant vortex of characters subverts a tired trope into something more grand. The distancing and near contempt for these characters is enhanced by Murdoch’s use of satirical chapter headings. The projected distance of looking at her characters through a window in this way intensifies their sense of loneliness and paralysis.

There is an intensity to The Italian Girl that compels me to dip deeper into Murdoch’s fiction. Perhaps next I’ll turn to the longer The Sea, The Sea.

We are anxiety-ridden animals. Our minds are continually active, fabricating an anxious, self-pre-occupied, often falsifying veil which partially conceals the world.”

What chiefly pierces that veil is a sharp, direct perception of things which are no part of our own being. For instance:

“I am looking out of my window in an anxious and resentful state of mind, oblivious of my surroundings, brooding perhaps on some damage done to my prestige. Then suddenly I observe a hovering kestrel. In a moment everything is altered. The brooding self with its hurt vanity has disappeared. There is nothing now but kestrel. And when I return to thinking of the other matter it seems less important.”

The veil, however, is persistent and terribly hard to detect. In every age it subtly provides new, unnoticed ways of evading reality. Detecting those new forms is a prime business of philosophy, but of course philosophers often find it no easier than other people. (It is always a significant question to ask about any philosopher; “what are they afraid of?”)

Mary Midgley
Sorting Out the Zeitgeist: The Moral Philosophy of Iris Murdoch

It amuses me greatly when a degree of unconscious direction behind seemingly arbitrary reading choices becomes clear. What is intended to be patternless drifting from one book to the next, loosely following very broad themes, takes on the form of a literary centripetal force pulling towards a single area of study. Even a year ago I felt the pull towards the study of the Vedas, but resisted the tension, mainly because I couldn’t quite grasp where to begin. As Paul Deussen, a friend of Nietzsche’s, wrote in his old (1907) Outlines in Indian Philosophy, “European idleness tries to escape the study of Indian philosophy.” I still feel that inertia, intimidated by the immensity of the task. But, but …

Rereading Virginia Woolf’s The Waves one night, I came across Bernard’s monologue:

I am not one person, I am many people. I do not know who I am – Jinny, Susan, Rhoda, Neville or Louis – or how to distinguish my life from theirs – ‘we are bound not only to our friends but to the long-long history that began in Egypt in the time of the Pharaos when women carried pitchers to the Nile.’

I started going through The Waves and scribbling notes of instances where Woolf uses metaphors to indicate the relation of one to the many, that Nature is ‘one form in diverse mirrors.’ Both currents of thought were heavily present in my recent readings of Clarice Lispector, Pierre Hadot’s Plotinus and various interpretations of Heraclitus’ Fragments.

For instance, there is the following paragraph from Hadot’s superb Plotinus book:

Since we look towards the outside, away from the point at which we are joined together, we are unaware of the facts that we are one. We are like faces turned towards the outside, but attached on the inside to one single head. If we could turn around – either spontaneously or if we were lucky enough to ‘have Athena pull us by the hair’ [Homer], then all at once, we would see God, ourselves, and the All.

(Incidentally, not that I’ll dwell on the topic here, Plotinus’s notion of deification means the destroying of man, not the modern day religious notion of man living and working in God.)

The philosophical and historical worth of the Vedas has been acknowledged from Voltaire onwards, their influence of Greek culture is certain,  also on most of the major mystical and philosophical traditions, and from there to poets and story-tellers. “The Greeks may have been the cradle of Western civilisation, but the Vedas are the womb of world civilisation.” The more I read on the subject the more I see the influence on writers are diverse as Heraclitus, Plato, Plotinus, Kant, Vico, Woolf, Eliot (clearly), Lispector, Iris Murdoch, Nietzsche, and Emerson.

Please feel free to suggest essential or helpful texts that deal with the influence of the Vedas on Greek culture, or texts that help a curious amateur with the Vedas. This is likely to give some shape to my otherwise arbitrary reading over the next 6-12 months.

I knew little of Elias Canetti’s life until yesterday. Now I feel I know too much. A couple of interesting links (there is no shortage of highly polarised opinion pieces):

There was one very obvious drawback to Canetti’s purist approach to the written word: nobody in the London literary circles he penetrated with such apparent ease had heard of him. The only Englishman who had read Die Blendung was the Sinologist Arthur Waley: “Imagine what it means in a large country, which for me was the country of Shakespeare and Dickens, to have one single reader.”

Expecting reverence, Canetti was greeted in England by blank stares. So far as he could tell, his only novel, Auto-da-Fe, swiftly banned after publication in German in 1935, had exactly one English reader, Arthur Waley, the great expert on Chinese literature. Canetti’s life became a campaign to find psychic support for his princely self-regard. He evaluated every cocktail party according to whether people knew of him. If they didn’t, he felt humiliated.

One of the many peculiarities of Elias Canetti’s only novel Auto-da-Fé is the relationship that forms between bibliomaniac sinologist Peter Kien and his housekeeper Therese. If the line of reasoning for their marriage fails to convince, the story becomes an artfully written but unsatisfying construction.

Reduce Canetti’s story to a morality fable of an ivory-tower intellectual becoming disconnected from reality, and forced by peasants to engage with life in all its messiness, and perhaps the Brothers Grimm could have adopted this for their collection. Ultimately though Kien’s misogyny is wearing, a block. As Susan Sontag wrote of the book:

In the guise of a book about a lunatic-that is, as hyperbole-Auto-da-Fé purveys familiar clichés about unworldly, easily duped intellectuals and is animated by an exceptionally inventive hatred for women.

Published in 1935, Canetti’s book was praised by Thomas Mann and Hermann Broch. Iris Murdoch regarded Auto-da-Fé as “one of the few great novels of the century; savage, subtle, beautiful, mysterious and very large.”

Eulogies from writers I admire encouraged me to persist with this book longer than my inclination or patience. I recognise each of Iris Murdoch’s epithets but the last; the world of Auto-da-Fé struck me as very small and on page 300, of 464 in my edition (Cape, 1965) I set aside the book.